Gold surged on Tuesday after weaker-than-expected U.S. jobs creation in September boosted the precious metal's safe haven edge, while the dollar's sharp fall against the euro lifted other commodities priced in the U.S. currency.

Geopolitical and supply-demand concerns pushed some markets higher. Benchmark Brent crude oil out of Europe edged higher after news of a deterioration in relations between the United States and key OPEC oil producer Saudi Arabia.

U.S. crude prices, however, fell after the U.S. Energy Information Administration reported higher inventories of oil. That drop weighed on the Thomson Reuters/CoreCommodity CRB index, which counts on U.S. crude as its main component. The CRB closed nearly a quarter percent lower, despite some sharp gains in several markets it tracked.

Nickel and silver led the advancers on the CRB, rising at least 2 percent each. Cocoa, copper, lean hogs, aluminium and gold all rose about 1 percent or more.

Gold rallied while the dollar fell to its lowest in nearly two years against the euro after the soft U.S. jobs data for September raised expectations the Federal Reserve will have to stimulate the economy at the current pace into 2014.

U.S. nonfarm payrolls rose by 148,000 last month, the Labor Department said, well below the 180,000 forecast in a Reuters poll. The data raised worries the world's largest economy had lost momentum even before a government shutdown this month.

"We were not even close to the 180,000 number ... the main takeaway is that Fed tapering is still a long way away, probably not for this year and that's the reason why everything shot up - equities, commodities and gold in particular," said Robin Bhar, a metals analyst with Societe Generale in London.

"The next 24 hours are crucial because on what we have just seen, gold should hold and even move higher if the dollar weakens."

Oil's benchmark Brent crude rose after a source close to Saudi policy said Riyadh would make a "major shift" in dealings with the United States in protest against Washington's perceived inaction over the Syria conflict and U.S. overtures to Iran.

The planned change in ties between the energy superpower and its traditional U.S. ally would have wide-ranging consequences, including on arms purchases and oil sales, the source said. 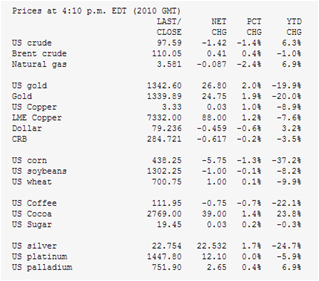